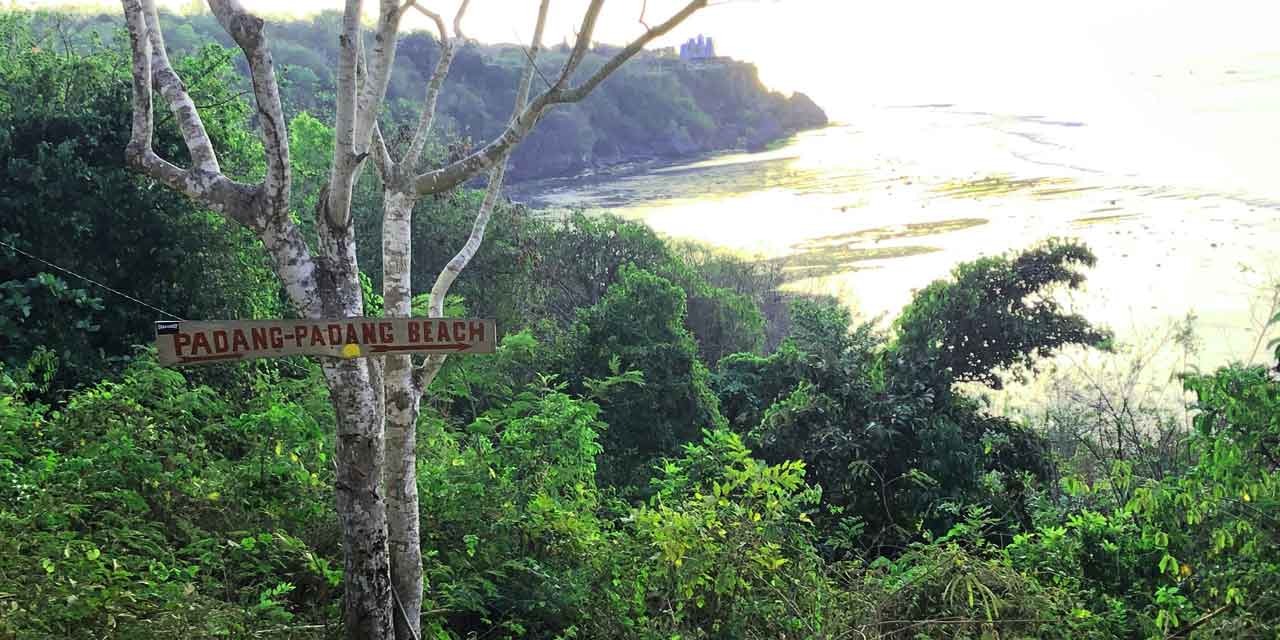 we spent 16 days in Bali, Indonesia. we already visited Bali a few years ago so we decided to mix things up this time by staying at a surf camp. on our last trip we stayed in an Airbnb villa near South Sanur and then a hotel on Kuta Beach.

turns out we were too ambitious about expecting enough free time to attend surfing lessons at our surf camp. we surfed once in the 16 days we were in Bali. we had some work "emergencies" pop up and weren't able to take advantage of the purpose of our trip to Bali...

we stayed at two different Rapture Camps, Bali Cliffs and then Padang. Rapture is an all-inclusive surf resort, and Ryan tried out their Portugal camp during the Fomo retreat earlier this year.

both camps are very smoothly operated. campers eat breakfast and dinner together (included), while lunch is often served at the beach between morning and afternoon surfs. the atmosphere at both camps are vastly different: Bali Cliffs camp is relaxing, sprawled-out, quiet, feels like an exclusive resort, and far from the rest of the city. the Padang camp is more confined, close to several restaurants and bars, and feels like you're in a jungle.

we both preferred the Bali Cliffs camp. the location of the Padang camp is much more convenient but Hideko learned she is not too outdoorsy (she was not a fan of showering outside with the frogs, spiders and geckos at Padang).

Bali is beautiful. here is a view from Single Fin, where nearly all young tourists seem to congregate for the night: 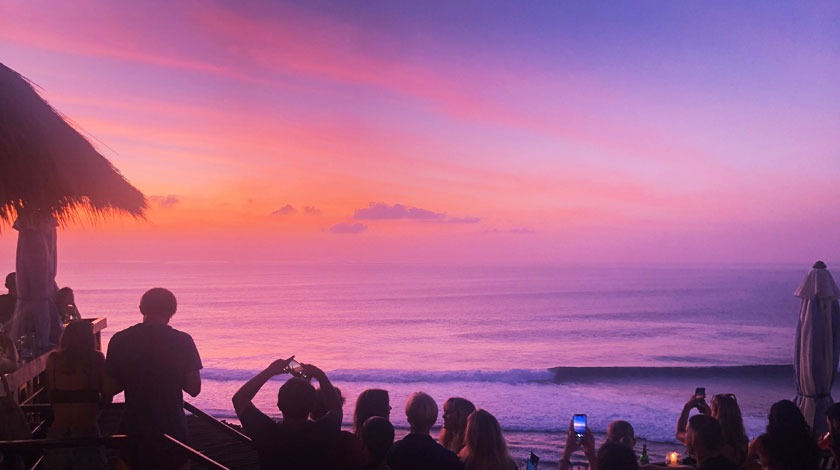 and here's a random beach (of many) off a beaten path: 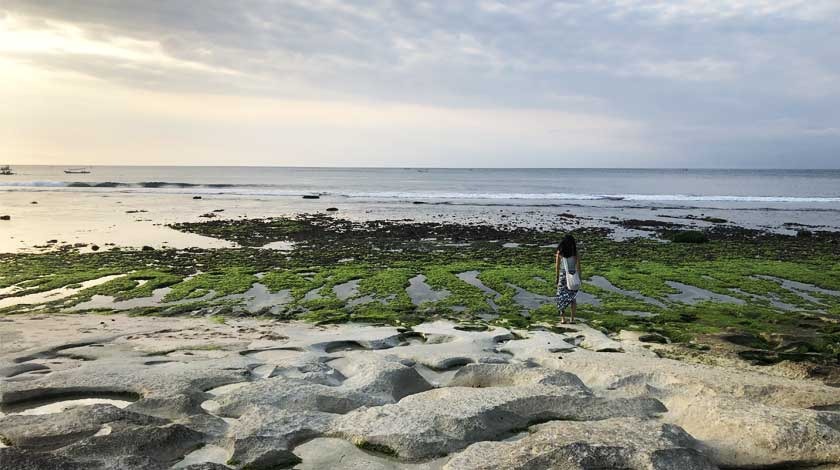 we're heavily borrowing from our 2016 trip to Bali. as mentioned before, we were not able to explore much this time around.

in 2016, we did a sunrise hike of Mount Batur. we were picked up at 1am by our shaman guide, started the climb around 2:30am and reached the top around 4:30am. at the peak, our shaman steamed some eggs within the hollows at the top of the volcano and we enjoyed egg salad sandwiches while watching the sunrise. this was the highlight of our trip: 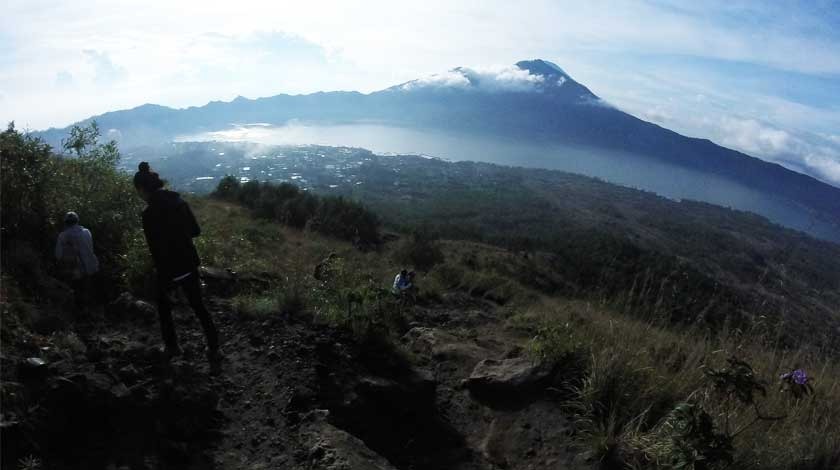 after the hike, our shaman dropped us off at a coffee planatation where we tried luwak coffee (among other teas and coffees). luwak coffee is the "most premium coffee in the world" and is created from coffee beans that are harvested from the feces of the luwak animal. sounds gross, but the coffee beans aren't actually digested and are still wrapped in its hard shell.

the day ended with some time at a hot spring: 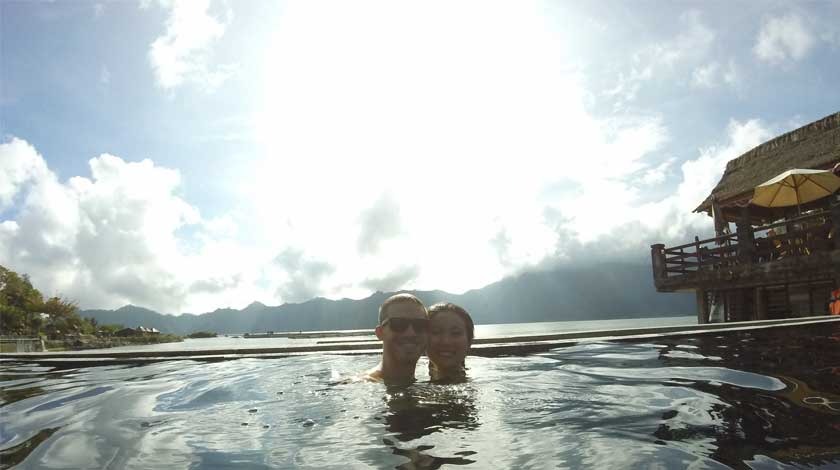 our first camp in Bali was $123 per night, our second was $81 per night. this was inclusive of breakfast and dinner, although we did not eat either at the camp most days (#ryaniscarnivore).

meals were $7 /each on average.

Bali is very affordable if you try to make it so. you can stick to Balinese food at warungs and comfortably eat at <$4 per meal. Ryan's diet consists of mostly steak so we did not do that.

here's a comparison of our New York City vs Bali lifestyle.

we didn't take pictures ourselves but here is Rapture Camp's website to see their setup.

local Indonesian food includes a lot of tropical fruits, vegetables, and rice/noodles. the protein portion of the meal is mostly tofu, chicken or seafood.

Hideko fared well with acai bowls and salads. Ryan found western restaurants (which was not difficult to find in the tourist areas) that offered beef.

steaks were expensive relative to local food ($30 per 6 ounce steak on average) but affordable compared to some European countries + the US.

this was our first time this year without a kitchen or a fridge. the lack of freedom from timing meals around our ability to go into town was jarring. we rented a scooter on the 3rd day and kept it for the rest of the trip.

we learned on this trip that camps with set schedules are probably not for us.

this was the first instance since college where our entire schedule was dictated by someone else (i.e. the surf camp). the time of day we woke up, left for the beach in the van, ate our meals, and returned back to our rooms for the night -- all were largely determined by the camp if we wanted to take part in the surfing.

this did not work well for our work demands. after the first day of this, we rented a scooter for the trip and worked in cafes for the remainder of our 2.5 week trip.

there will hopefully be a time in the near future where we can abide by a schedule of someone else's choosing. unfortunately, now is not that time.

Rickshaw followers are accountability partners. here's what we achieved in Bali.

Ryan deleted a lot of code at Fomo, recorded new lectures for our Micro Acquisitions course, and created a handful of video tutorials for our ops assistant.

Hideko took over support for our portfolio companies (filling in due to some personnel changes) and also started training a new support rep to eventually take her place. the project is an interesting balance of identifying opportunities for automation and feature builds (a birds eye view mindset) while buried deep within the day-to-day onslaught of support tickets. Eisenhower matrix ftw. otherwise, more of the same freelancing and portfolio company work detailed in our previous posts.

prior to Bali we were back in Kuala Lumpur. we chose not to write a post about our 2nd visit, but while there i recorded a new song. in Bali i released that song. it's called We Make Our Own Luck.

Hideko mentioned we rented a scooter... this was key. although air conditioning sucked at the surf camp, meat options generally sucked at restaurants, and i didn't surf much, having the freedom to go anywhere, anytime, made the trip a good experience. i also got spotted randomly by a Twitter follower at a cafe. that was neat.

riding around in a tank top, wearing headphones, is money. it's early retirement. no one talks about this.

i have much more respect for employees in support roles. i ran a children's toy product ecommerce store where my target customer was a pre-teen. responding to pre-teens' questions about fulfillment and order issues was... fun.

now i'm engaging with customers across our portfolio companies. while SaaS customers are generally better behaved than pre-teens, 80% of my day is still "fires" to put out and lots of "i need this ASAP"-type requests.

the bright side is that this is a good way to develop thick skin. 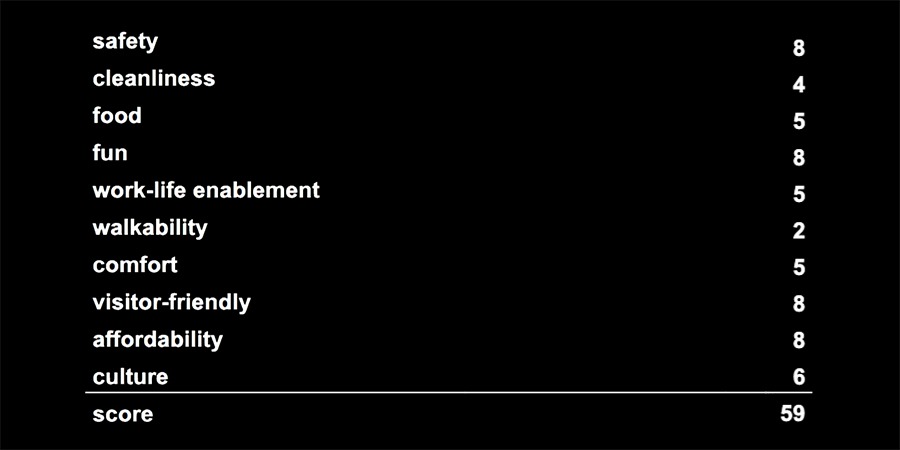 if your objective in traveling here is to drink mai tai's on the beach, ignore everything we just wrote. but if you want to ship, you need internet and air conditioning. sorry.