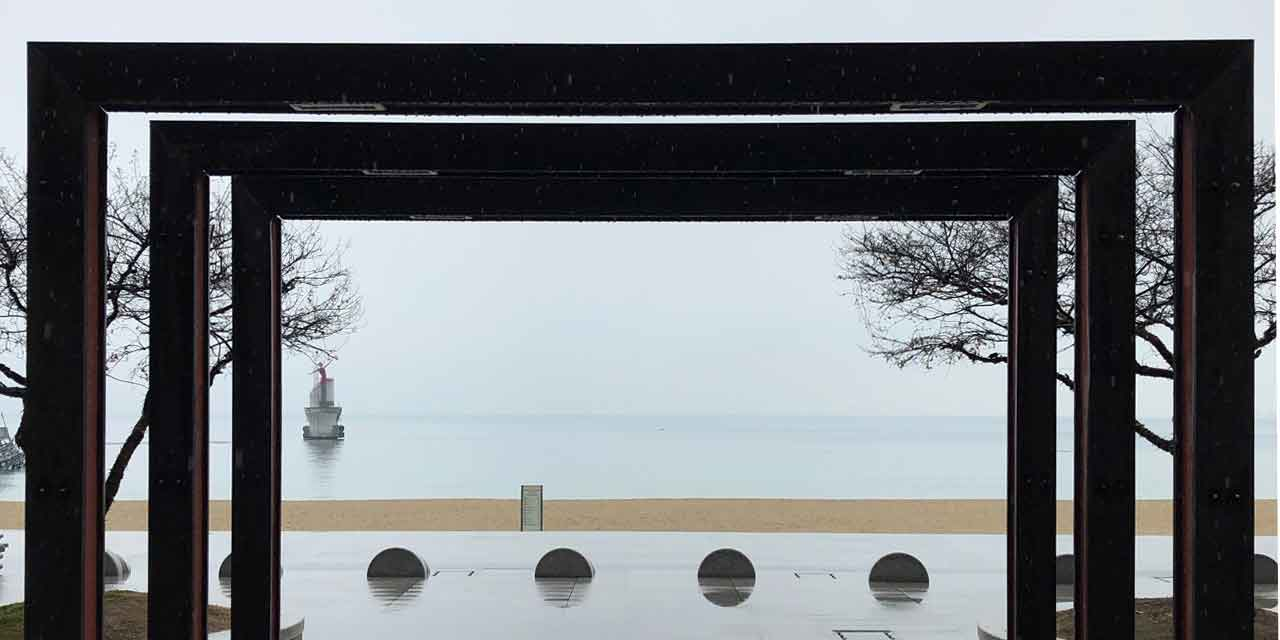 Busan is the second most-populated city in South Korea and known for mountains, beaches, and the world's largest department store. we stayed on Haeundae Beach, which is a 1.5km stretch along the southeastern coastline of South Korea.

Haeundae in winter is quiet, monochromatic, and rainy. fortunately, we chose a comfortable Airbnb with the perfect working space. we went heads down and chalk up this trip as a home run for productivity.

note: some of these overlap with our Quirks about Seoul Korea.

pricing ranged from $5 for kabobs at a food stand, to $10 for a gourmet hamburger, to $35 for a high-end buffet per person.

we recommend the Haeundae Market for the more adventurous foodies. the most shocking finds were live eel and live octopus dishes. this is exactly as it sounds: the seafood is still moving as you gulp it down. the meal preparation was unsightly so we won't go into the gory details. we were not brave enough to try this and our appetite was squashed for the evening.

that being said, we enjoyed some delicious meals in Busan. we're quickly learning that Korean cuisine is more expansive than we thought. here's a sampling of what we tried:

here's a comparison of our New York City vs Busan lifestyle.

we gorged on everything from Korean bbq and steakhouses to street vendor fare. a solo digital nomad, or a thriftier couple, could definitely beat our cost of living by at least $700-1,000 for the same 13-day stay.

this Airbnb had everything we needed for a productive working environment. floor to ceiling windows let in plenty of light and an oversized dining table allowed ample elbow room.

Rickshaw followers are accountability partners. here's what we achieved in 13 days in Busan.

Ryan won a chargeback dispute with a scammer who tried to steal my course -- separate case study coming soon. ran a marketing experiment and crunched performance benchmarks on JavaScript widgets. two of the new apps we're building at Fork are just a couple weeks away from launching, so we'll post those here as well. finished two books by Eckhart Tolle (Power of Now) and Mike Cernovich (Gorilla Mindset).

Hideko built 2 Fomo integrations, worked on adding test coverage to existing Fomo integrations, completed the Javascript/DOM lessons in Launch School, closed books for our businesses, and read 1 non-fiction book: "Never Split the Difference" by Christopher Voss. she is ready to take on her next car salesman with better results than before.

together we started research on an upcoming Fork project (details to follow).

unlike Seoul where gyms were difficult to find, this guy helped us locate Dallas Fitness, which was a 10 min walk away and provided a much needed break from our home workouts.

this is what the building looked like. not so easy for the average expat to pinpoint, but Ryan knew enough Korean to identify the sign for a gym on the 9th and 10th floor. 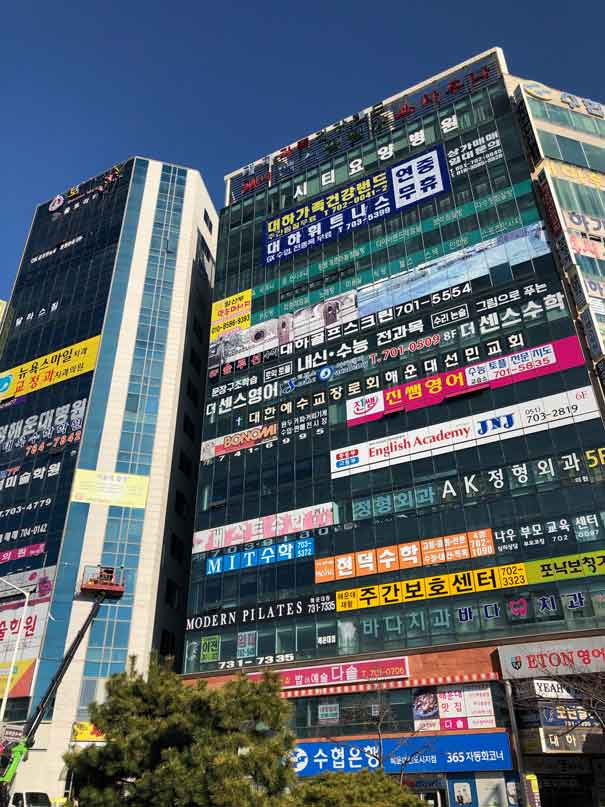 Dallas Gym is a no-frills gym with old, rusty equipment but all the essentials.

according to our guide to Busan fitness, some gyms in the area are limited on heavyweights. Dallas Gym had barbells up to 36kg (or 80lbs).

signup is on the 10th floor, where you pay the receptionist and fill out some paperwork. you then take this paperwork to the 9th floor and hand it over to a gym employee. your gym membership is now active.

fitness: in gym-free Seoul i did home workouts, which for me is 6-7 sets of:

each set takes 90-120 seconds and i usually do slightly longer (10-15 second) breaks between the last few rounds to catch my breath. it's an OK routine but not good for strength training.

fortunately in Busan we found Dallas Fitness, so i got in several workouts.

to maintain high protein intake during the day (Korean BBQ at night) i had a few triple bacon cheeseburgers -- no bun of course.

since i'm traveling with my ukele i found this awesome recording studio but unfortunately they're booked solid the next few months.

as a backup "express myself through music" plan i arranged a medley of ~10 rap songs about love.

i needed a prescription refill while in Busan. this was much easier than anticipated and i was able to get a prescription and purchase my medication -- all within 6 minutes.

to learn more about how i navigated the Korean health system, see How to Get Birth Control in Korea. 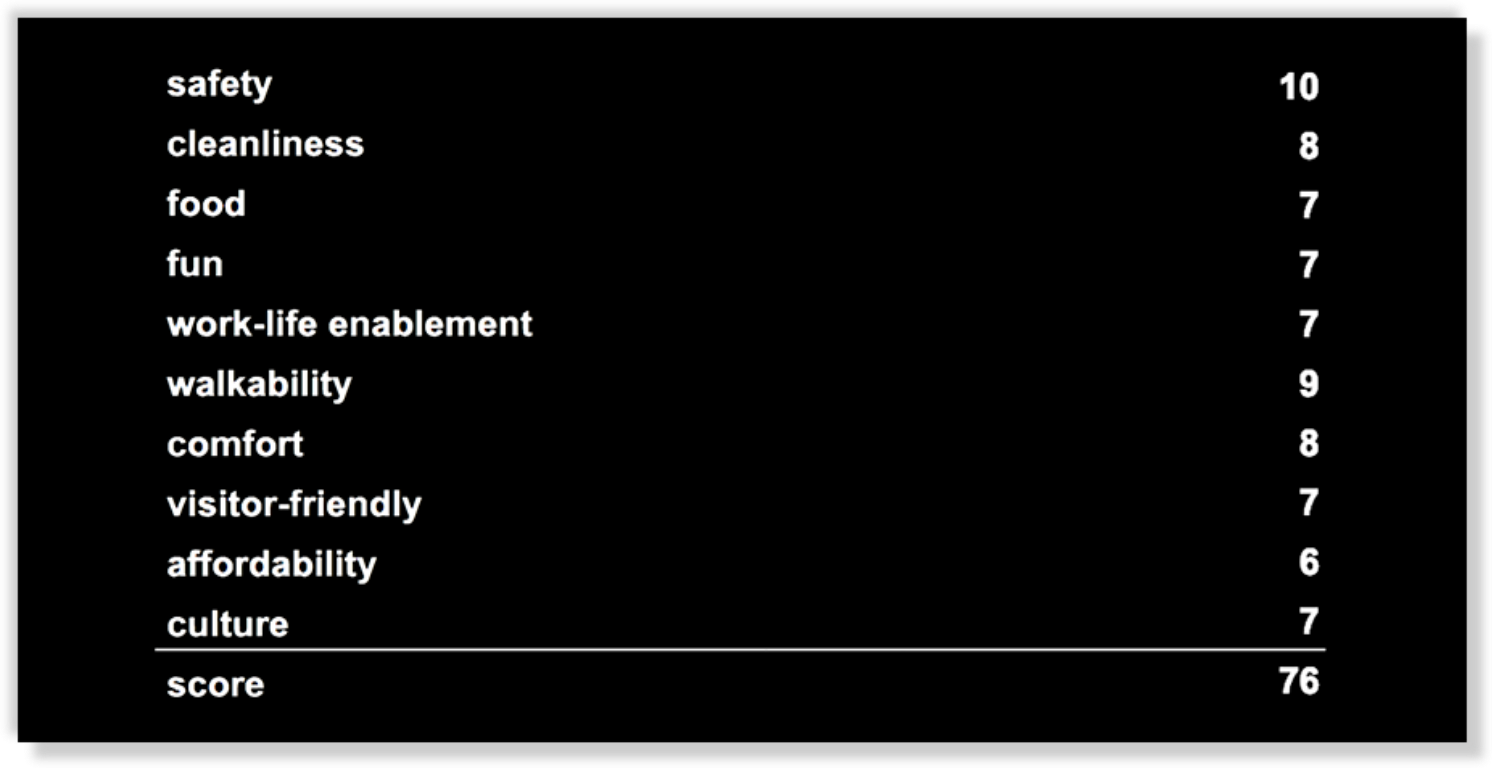 culture: social trust is higher than anything we're used to in the States. we saw perhaps 1 policeman the entire time we were there, seemingly because of low crime rates. similarly in Japan the police don't have any thing to do.

however, we didn't love the lack of diversity in behavior or appearances. there is one very specific standard of "attractiveness" for men and women. we also appreciate hustle and were disappointed to see restaurants and shops arbitrarily closing early. generally Korean citizens are less assertive, and we believe this is ineffective for clear communication.

fun: Busan should be more fun in the summer, when the beaches are full of sunshine and swimsuits. that said, Koreans are not outwardly friendly to strangers so there's less of a chance you'll find yourself dancing with new friends at the end of the night.

we hear Haeundae is bustling in the summer. we'll have to try it out again during the swimsuit season. until then, Busan will be the city where we accomplished a great deal with no distractions.

감사합니다 (komsuhhomnida, thank you) for reading!