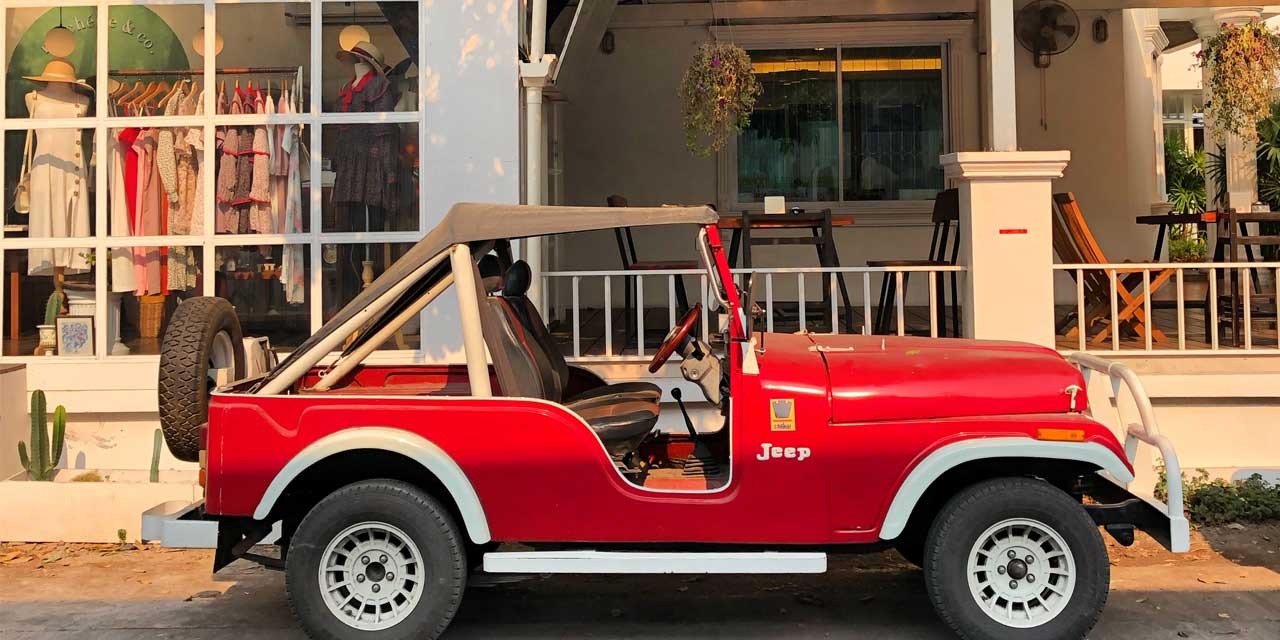 we spent 25 days in Chiang Mai along the trendy Nimmanhemin Road, nicknamed "Nimman."

Chiang Mai has all the activities you could want in a thriving cosmopolitan city, yet maintains a relaxing, "no worries" small town culture.

the new property development of high-rises suggests the sleepy and slow-moving city could be in the midst of a major change. it might be a good idea to put this city on your "travel to soon" list.

this was our longest stay in one city so far on our 2019 travels.

we stayed in a condo adjacent to the Maya mall, found a one-month membership to a killer gym, became regulars at coworking cafes and restaurants, and finally settled into a city long enough to straddle the line between "tourist" and "expat."

here's a comparison of our New York City vs Chiang Mai lifestyle.

at the same time, we weren't shy with outdoor food carts. we had been mostly avoiding these during our trek through Asia because of recent exposés into the use of gutter oil and rat meat by street vendors in China.

a solo digital nomad, or a thriftier couple, could definitely beat our cost of living by at least $800 for the same 25-day stay.

our Airbnb was in a prime location, adjacent to the Maya mall and 2 minutes from the Nimman strip. we took note of plenty of other modern condos in the area to try out for future trips to Chiang Mai.

in the lobby of the condo building, we discovered a "for rent" brochure on the resident bulletin board at a rate of $800 per month. through Airbnb we paid $1,457.68 for our 25-day stay. while we like knowing Airbnb is there to support us if things go wrong, we'll look into local apartment rates for month-long stays in the future.

a meal of curries or meat skewers from a food stall was $1-3 per person. our hibachi dinners and farm-to-table entrees were $10-$40 per person.

around the day we arrived in Chiang Mai i started a productivity challenge with 3 strangers on the internet. we each set 6-7 goals that we wanted to accomplish within 30 days.

we even made a video (thanks Pat!):

while it's tough to say who "won" the challenge, we all agreed it was a massively productive 30 day sprint thanks to the pressures of public accountability.

here are my 7 goals (top left) and a couple dozen other stretch goals and projects. strikethrough means i did it. 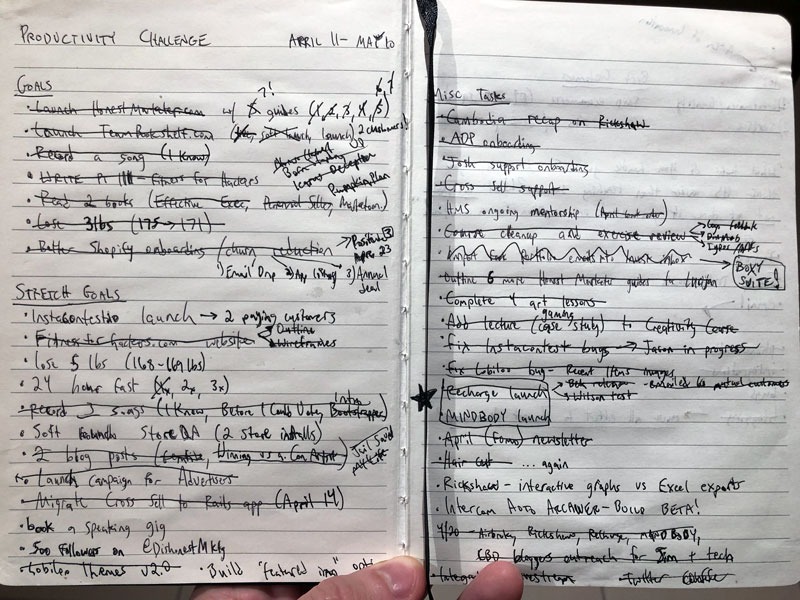 although i knocked out a lot of coding, "business," and side projects (wrote/recorded a 3-song EP), i'm most proud of reading 7 books in 30 day, a new personal best.

the last time i was in Chiang Mai for a month was September 2015 and that period was similarly among the most productive sprints of my life. there must be something in the [bottled] water.

Ryan is a seasoned founder, entrepreneur and freelancer but this is my first time outside of the corporate world. working for yourself means constant mental checklists, playing wack-a-mole as obstacles present themselves, and feeling like every minute spent not working spans the gap to success.

the "weekend" is an employee / student concept. some governing body authorizes 2 days "off" a week. but when your authority figure is yourself, the purpose of a "weekend" seems questionable.

in Chiang Mai i decided to experiment with a "me day" where i would de-stress, recharge, not think about work, and eat and do whatever I wanted.


this might sound like a tamer Saturday to most but it was a fantastic day for me because of one thing: my mindset.

suddenly, i wasn't rushing through the supermarket with a hastily scribbled checklist. i wasn't running through todos in my head while on the treadmill. and i wasn't annoyed at groups of people walking slowly while taking up the entire sidewalk.

i think i'll set aside "me days" more often.

Rickshaw followers are accountability partners. here's what we achieved in 25 days in Chiang Mai.

Ryan finished the manuscript for his book, Fitness for Hackers, built features for 3 portfolio companies, and completed several drawing lessons in an online art school.

he even live streamed a feature build -- an integration with Reviews.io -- which will be published soon for nerdy marketers who want to learn how to do more, faster.

Ryan's new album debuts in a couple weeks and was recorded at a Chiang Mai studio, Teera Music.

Hideko completed a Fomo integration build and tweaked others, continued learning Backbone.js, made final tweaks to Team Bookshelf before launch and wrote documentation for operational and lead-gen workflows.

she started marketing campaigns for an ad network, trained our assistant to take over more administrative tasks, wrote RSpec tests for a new project, completed build of v3 of our OCR (optical character recognition) app, and closed books for our businesses.

we had no idea what the Songkran Festival (Thailand New Year) was before arriving in Chiang Mai, 2 days before the holiday began.

well, it's 3+ days of an epic, government-sanctioned water fight. it's total madness.

in the days leading up to the holiday, large public establishments (restaurants, outdoor bars, malls) install massive canisters filled with water in front of their entrance. then the city shuts down and everyone is in the streets with Super Soakers, hoses, and buckets throwing and shooting water at everyone else.

no one is given a pass. even motorcyclists are hosed down while they ride by, which actually seemed quite dangerous. grown adults pile into the back of their pickup trucks (there were a ton of pickup trucks) and cruise around the city with their Super Soakers and shoot water at unsuspecting pedestrians.

Hideko chose to stay in the apartment and Grab (Uber and Uber Eats alternative) food to our apartment nearly each day.

Ryan decided to sprint (literally) around, intent on his mission to explore different cafes despite the madness. his efforts didn't keep him dry, he still got drenched.

we're amazed an entire country can shut down to engage in fierce water warfare for multiple days. 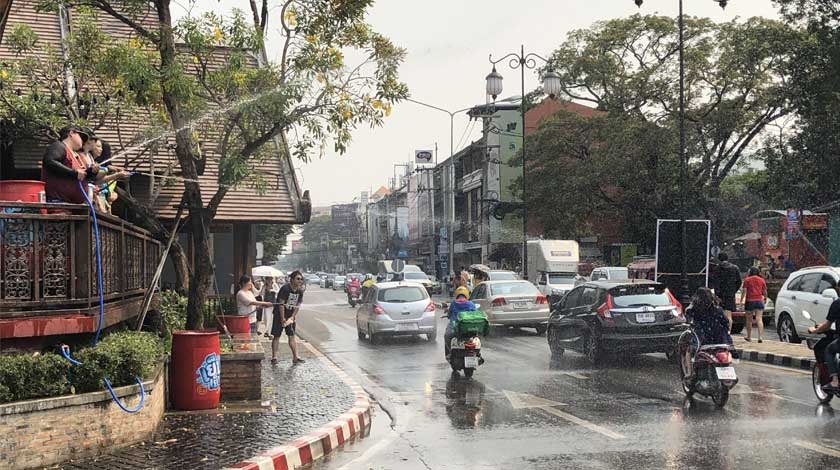 it is impossible to live in a heavily populated area (like Nimman Road in Chiang Mai) in Thailand without being affected in some way by this festival. you either join in with the crowd or are forced to hibernate indoors. but you definitely don't have the option to ignore it and go about your day like you can with US holidays. 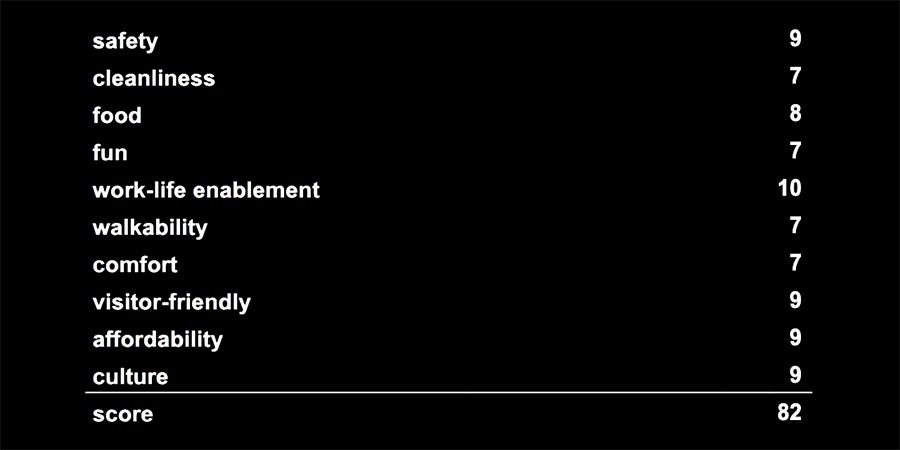 Songkran festival, pollution, and lack of hand sanitation aside, we loved Chiang Mai.

the city is affordable, friendly, calm, fun and safe. it's the perfect destination to take a break from a stressful life and we aren't the only ones who think so.