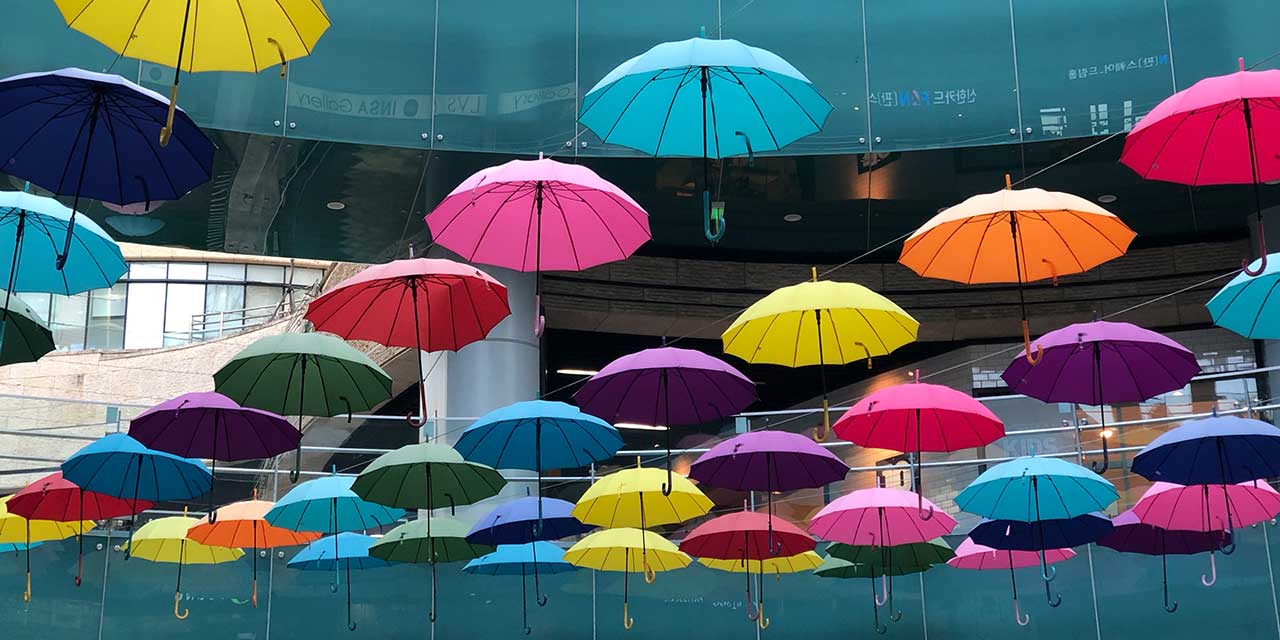 this was the first city in a year-long journey and we're getting accustomed to communicating by pointing and miming. Seoul was an easy transition from New York City: bright lights, high energy, crowded, lots of restaurants and bars open late.

within a day we formed our new routine:


while our only excursion was a 1-hour trip to the Trickeye Museum, we still experienced Seoul "between the lines" on walks to cafes and restaurants.

pricing ranged from $4 for a simple sandwich, to $6 for a 돼지국밥 (boiled pork) soup (with the Korean side dishes), to $30 for a casual Korean BBQ spread for 2, to $60 for higher-quality Korean BBQ for 2.

traditional casual Korean fare was the cheapest. you could live off mandu (dumplings), bibimpap, bulgogi, and sundubu-jjigae and spend less than $7 per meal. non-Korean restaurants were priced comparatively to what you see in the US: an avocado salad for $11, a gourmet burger for $9, and a fajitas entree for $17.

here's a comparison of our New York City vs Seoul lifestyle.

surprisingly, coffee costs as much as $7-8 USD at specialty cafes. some offer $2 discounts for "takeaway" but since we treat cafes like offices, an extra couple bucks in exchange for hours of productivity is not a big deal.

Korean BBQ also ranges drastically in price; our favorite spot (we went 2-3x) had options as low as $4.50 per plate, while the most expensive place was ~$22 per plate for the same cut of meat (skirt steak).

a solo digital nomad, or a thriftier couple, could definitely beat our cost of living by at least $500-800 for the same 14-day stay.

we rented a loft Airbnb in Mapo-gu next to Hongik University and a huge train station. similar to our NYC apartment there were a lot of young people and 100s of restaurants nearby.

around the corner and behind the microwave is a breakfast alcove with a table + 4 chairs.

as you can see in the photos, this was surrounded by glass and an excellent space to work during in morning, before the sun made the room too hot without the blinds drawn.

since we were on the 8th floor and the building has thick glass windows, there wasn't much noise at night despite the drunk Koreans walking around downstairs.

downside of this apartment: literally zero drawers or shelves. a tiny closet held our coats, but everything else stayed in our duffel bags so we sifted through them daily to pick outfits.

Rickshaw followers are accountability partners. here's what we achieved in 14 days in Seoul.

Hideko wrote 1 post on this blog, refactored Fomo integrations, completed a jQuery lesson in Launch School, and read 3 non-fiction books: "Choose Yourself" by James Altucher, "Love Yourself Like Your Life Depends On It" by Kamal Ravikant, and "Gorilla Mindset" by Mike Cernovich. she read several fiction books, too, but that doesn't count towards achievement :)

she doesn’t know i took this. we’re pair-programming an app that will parse invoices into CSVs.

together we built a prototype app that scans PDF invoices and extracts relevant values into a spreadsheet. to do this we leveraged Tesseract, an open source library created by HP that converts text inside images to X-Y coordinates.

we did not watch a single second of television during our time in Seoul. Americans watch four and a half hours of television on a daily average. back in NYC we had a bad habit of zoning out to TV during dinner, which usually bled into a couple hours of mindless entertainment.

they say it takes 2 weeks to break a habit -- not watching television has added significant time to our schedule to be productive.

the first 1-2 days were kind of a "wash" because we had jet lag and were spending a lot of time building the backend of this blog.

when that settled we had to figure out diets and schedules. for example, Ryan likes fasting but Hideko "grazes" throughout the day. Ryan prefers steak and Hideko prefers vegetables.

so, one of our main challenges in Seoul (and likely beyond) was finding restaurants and meal times that worked for us, even if it meant eating separately or falling asleep, working out, and waking up at different times.

otherwise, Seoul was smooth sailing and we had no real issues communicating with locals or finding places to eat and work.

we wasted a couple hours looking for a gym with day or week passes, but when we found nothing we busted out Plan B, the "home gym." 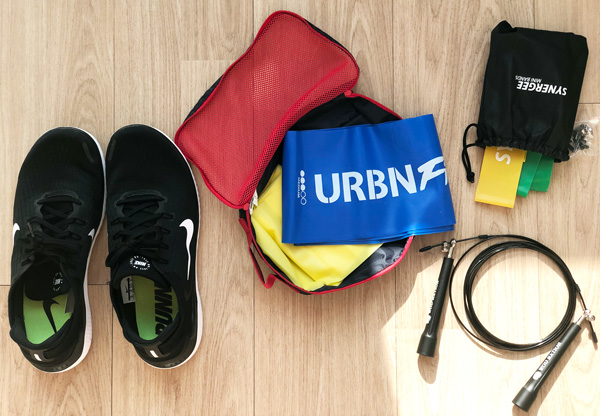 this gear, including an inflatable pilates ball, was around $25 on Amazon.

from a "fun" perspective our Seoul experience was weak. this will probably be a recurring theme in more than 50 upcoming travels being documented on Rickshaw.

that said, we did visit the acclaimed Trick Eye museum, which is an illusion tour that leverages a mobile app to create augmented reality experiences.

here are some of those installations:

we apologize for the portrait perspective.

remember that scene in Willy Wonka?

the closest Hideko's ever been to the ceiling. 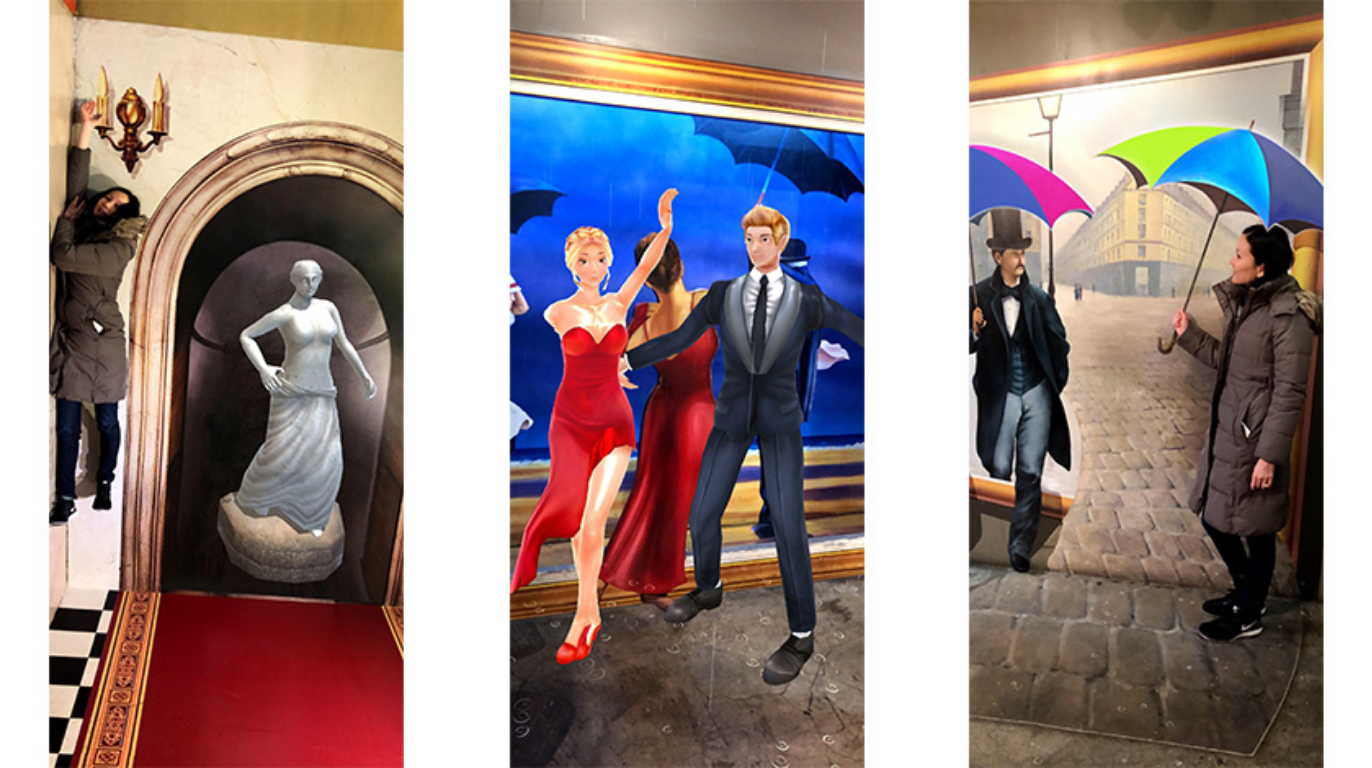 i found it helpful to work outside the apartment when possible, which became a great excuse to try lots of different coffees. Seoul was no different.

through Foursquare, expat travel blogs, and TripAdvisor, i was able to find a handful of fantastic roasters within 20 minutes walking distance of our apartment. 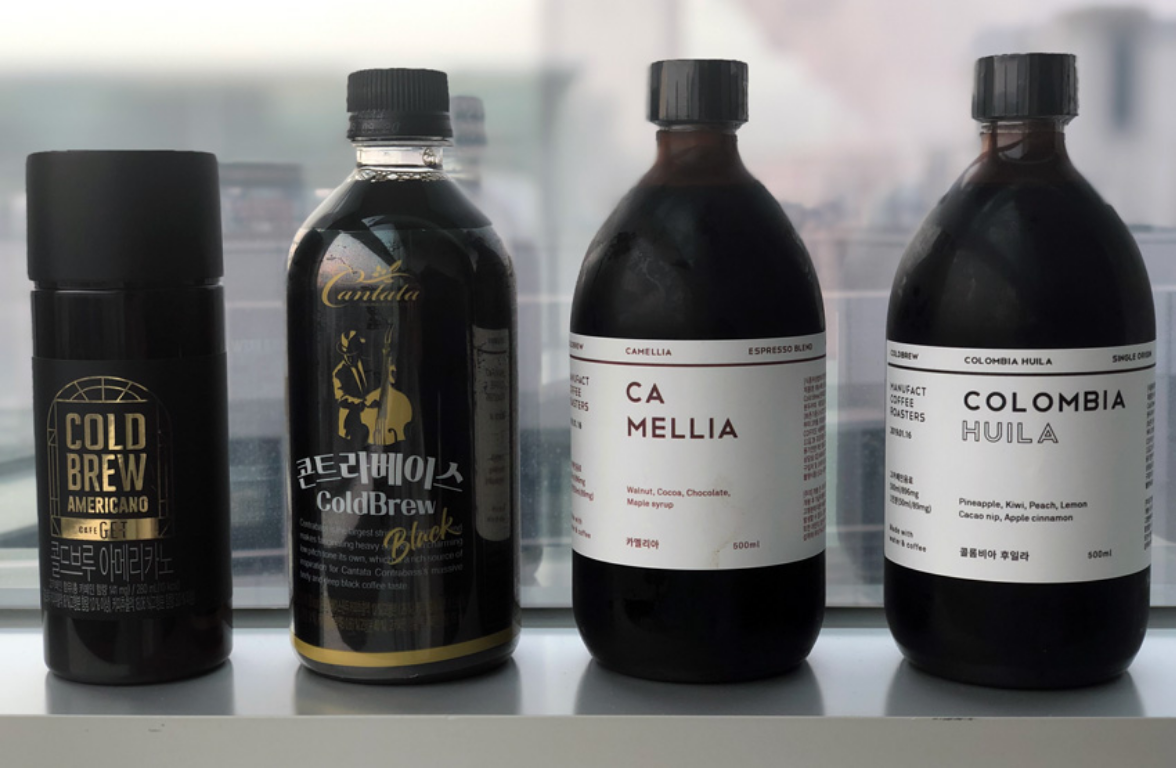 here are 2 blends from the grocery store (left) and 2 from MANUFACT, perhaps my favorite of more than a dozen cafes i tried. i drank the crappier stuff in the morning and saved the nice stuff for the afternoon when i was more coherent.

for ~11 out of 14 days in Seoul i practiced intermittent fasting and lost a few pounds in the process. 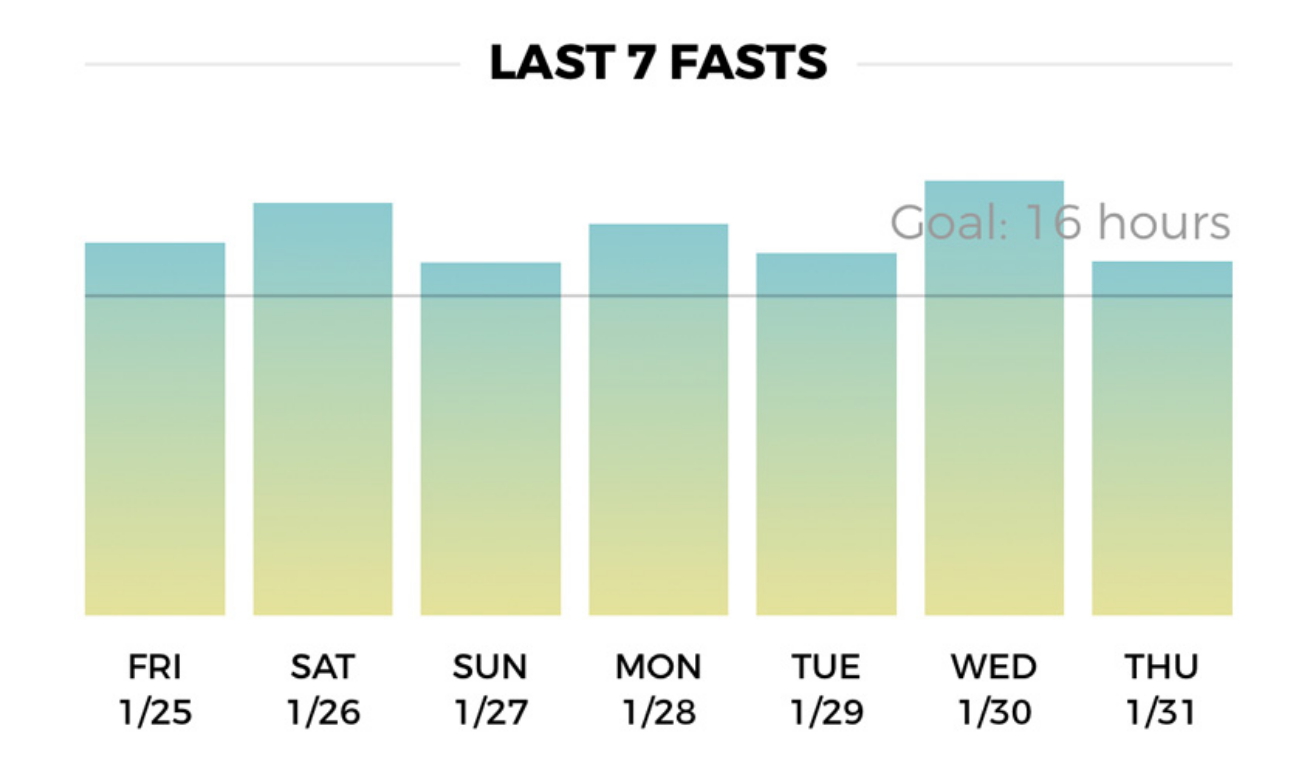 this basically means skipping breakfast and only drinking water or coffee between ~8pm to noon.

it took a few days to adjust, since i ate Quest protein bars daily for the past ~3 years in the States, but Korea doesn't really "do" breakfast food (eggs, bacon) and it's nice having 1 fewer meal to worry about every day.

i am a soup fanatic. one question i ask Ryan before we go to any restaurant is: "will there be soup?"

fortunately i did not have to ask that question in Seoul, since traditional Korean fare includes a large variety of soups. restaurants sometimes even serve soup as one of the banchan, which are the small complimentary side dishes that accompany an entree.

my favorite was 삼계탕 (samgyetang), which is an entire young chicken stuffed with rice, ginseng, and jujubes, simmered together to produce a flavorful soup. it's apparently a popular summer meal, as a way to counteract fatigue from the heat. i may be the only American to say this, but boiling hot soup on a blistering day sounds good!

here's a bowl of samgyetang: 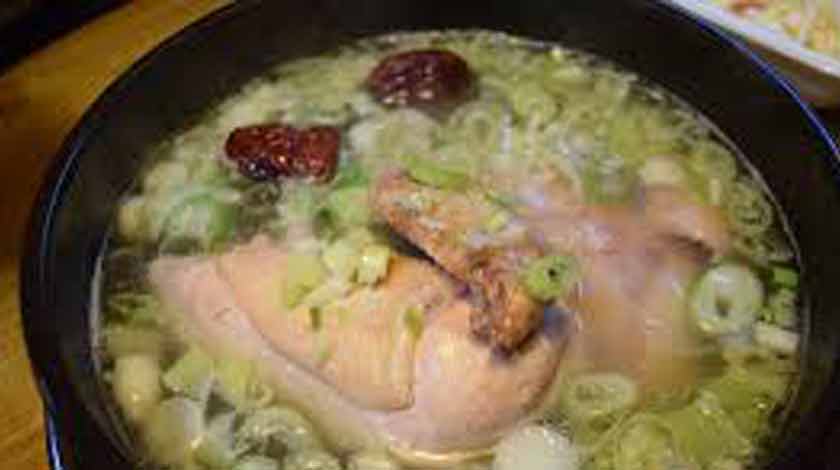 i'm an Asian lost in translation here. i can't speak Korean and i'm not familiar with the culture. i started off hesitant and tentative, but i've adapted to a "make decisions and ask for forgiveness later" approach. i've already made several social faux pas that resulted in a swift reprimand by an ahjumoni (older woman): opening the wrong door to the locker room, wearing shoes in a no-shoe establishment, and so on.

there are no excuses for me (like there are for Ryan) because people assume i'm Korean and am choosing not to follow the rules. the ironic thing is Ryan is the one who studied Korean in college.

just consider all the information you gather by being able to understand a language: signs that say "do not enter", "do not sit here", "recycling only" or "elevator is broken" do not stop me when they are in Korean. 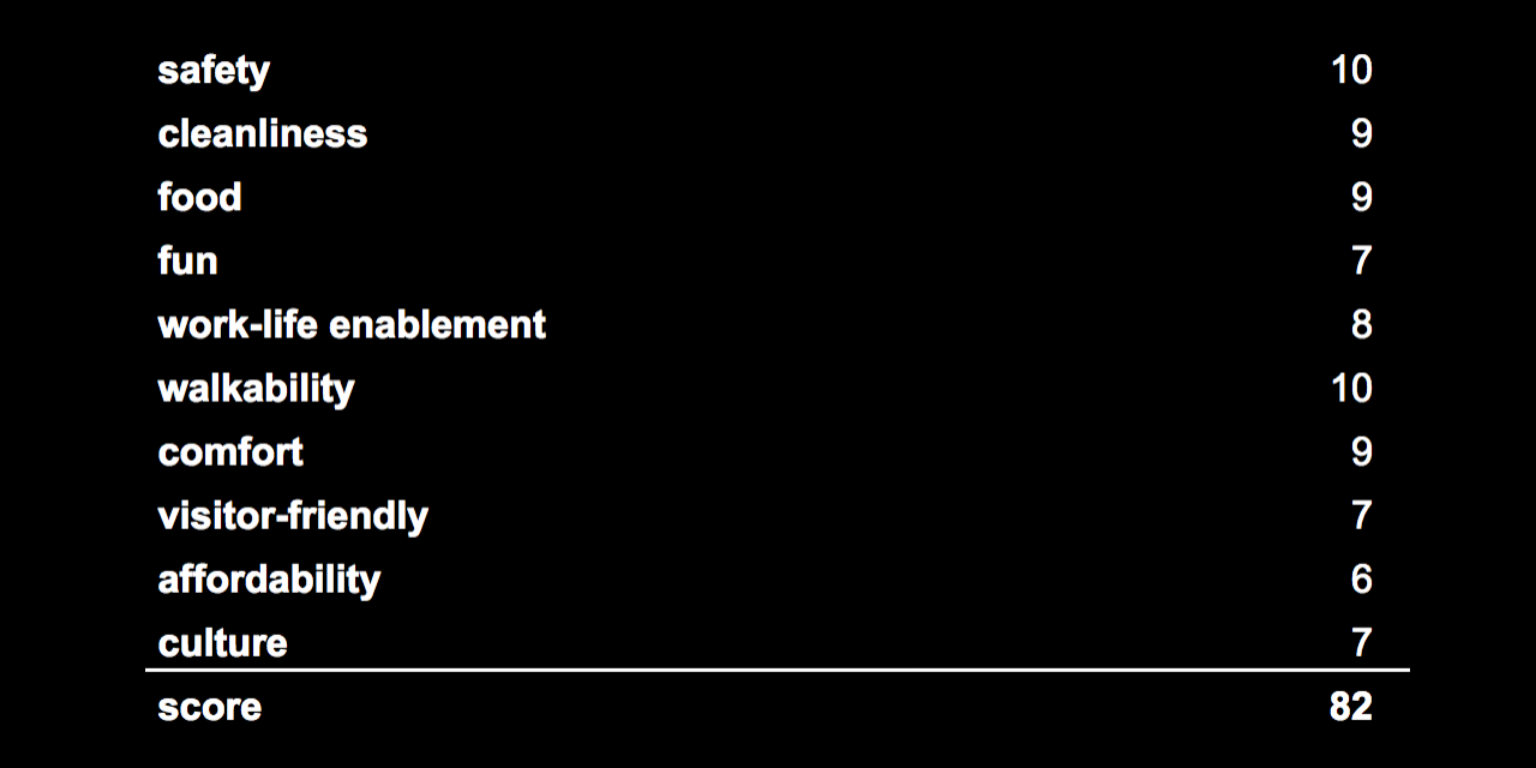 when we next visit -- hopefully with fewer work projects -- we'll see the North Korean border, some war museums, and the ultimate cliche: no-re-bang (karaoke).

감사합니다 (komsuhhomnida, thank you) for reading!